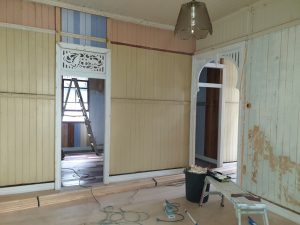 We’ve been ticking away at the renovation alongside our other work… let me give you a run-down of what we have achieved.

Nev has installed the new Breezeways and Fretwork in the hallway. (The traditional Australian Coat of Arms is a favourite of mine and ties in well with the hallway fretwork). The hallway fretwork was replaced because the original had been previously cut when some goose  had installed french doors,  we were finding it hard to make it look the part. We are happy with the new undercoated Fretwork as it is very similar to what was there originally.

Our trusty handyman is also working on replacing all the skirting and trims that were damaged or changed by our reconfiguration works. 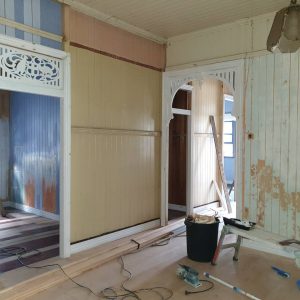 Deb has been working on stripping the front door back to timber; the progress has been slow as the paint was very thick – in some places completely hiding the features in the timber. Finally, the door is coming up nicely, a few more hours should have the front finished…

The old orange paint from the loungeroom has been stripped; in some places we had to use a heat gun in the VJ joints to make sure we got it all out. The Loungeroom is looking great now and should be sanded and undercoated this week also. We have already prepped and sanded the walls in the smallest bedroom and given it an undercoat.

A heat gun was used to prepare the back wall (formerly the kitchen wall) ready for undercoat. Being that the wall was part of a kitchen it had some nasty grease there, this has been stripped and cleaned and now looks fresh with an application of undercoat.

The decision has been made to close in the wall from the front gable side bedroom onto the verandah. This is how it would have been originally. We had talked about moving the superceded hallway French Doors there but they didn’t tie into the existing verandah French Doors….after much discussion on the topic of keeping it as “close to original” as possible the consensus was to close in the opening. This should be finished this week. 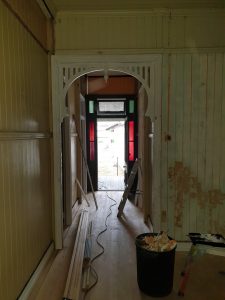 2 thoughts on “560 Lauren – The Renovation Continues…”

Transformed! 560 Lauren gets a Make Over!
Laughlin gets some loving.